How to stop negative thoughts from taking over 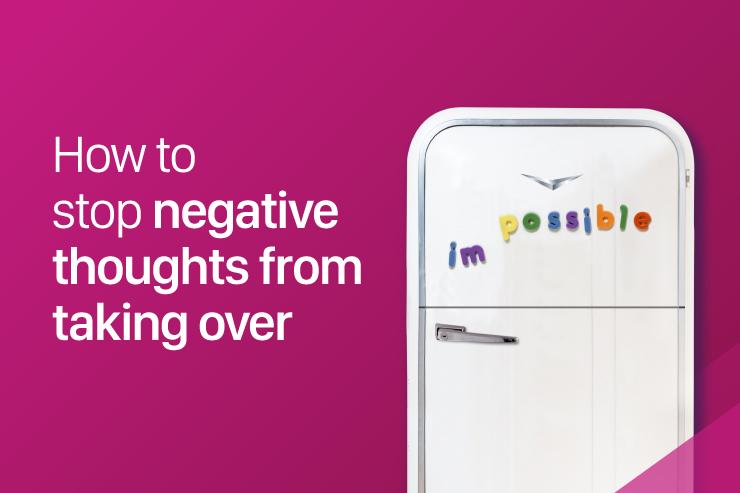 We have previously discussed 6 standout forms of unhelpful thinking, and how they can reinforce feelings of depression without us even realising:

In it, we outlined these patterns of thought and offered examples, so that you can hopefully start to spot whether you are applying any of these in your own day-to-day.

Now, in this post, we will share how writing your thoughts down allows you to visualise how you are feeling at any given time, identify negative patterns, and challenge how accurate those thoughts truly are.

Split a page of A4 paper into five columns, and title these columns:

Whenever you experience a negative change to your mood, start to complete this sheet of paper as soon as possible. In the Situation column, write where you were, what you were doing, if anybody else was there, and what happened immediately before your change in mood.

Let’s use Sally as an example. In her thought diary, she writes that she was at home in her bedroom. Before her change in mood, she had just texted her friend with an excuse as to why she wouldn’t be coming to her friend’s party.

In the Feelings column, you would then identify any emotions you are feeling in response to the situation, and rate the intensity of these on a scale of 0% to 100%. In Sally’s case, she noted down sadness at 80% intensity.

Then, in the Thoughts column, you would write down what thoughts are going through your head in response to the incident in question, and rate these on the same intensity scale as your feelings. For Sally, she identified three thoughts:

Now let’s consider each of Sally’s thoughts in relation to the six unhelpful thinking styles discussed in this article:

Keeping your thought diary close and accessible at all times allows you to visualise your thoughts and feelings whenever you experience low mood.

When you have your negative thoughts noted down, you are in a far stronger position to challenge them. Take one thought at a time and approach it logically; what evidence do I have in support of this thought, and is there any evidence against it?

“I always let people down”

By looking at her thought in a more balanced way, Sally determined that there was more evidence suggesting that it was not true than evidence that it was true. This is not positive thinking – she is not simply reassuring herself, but basing her new thinking on facts.

If you need help gaining this balanced perspective, consider the following:

Now, Sally can fill in the final two columns of her thought diary. In the Revised Thought column, she has now changed her thought of “I always let people down” to:

“On this one occasion I cancelled plans for a genuine reason. It doesn’t mean I always let people down. I attend lots of things and there is no expectation that I can be available for everything.”

This is a much more reasonable, balanced statement, and Sally rated the intensity of her belief in this at 90%. Then in her Revised Feelings column, Sally’s feeling of sadness, which she originally rated at 80%, dropped to 20% when her thoughts changed.

We hope that this guide has explained how to pinpoint the different types of unhelpful thinking we have, and how we can challenge these thoughts on the path to improving our mood overall.

Like anything, this takes time to master, which is why it is important to keep your thought diary active so you can practice. But, once you’ve kept your diary for a while, you’ll get used to thinking about the evidence supporting and disproving your thoughts, allowing you to eventually challenge them instantly.

This all goes towards helping to break the cycle of depression. The ability to challenge our negative thoughts influences the way we feel and behave, and this skill can make a huge difference in your life moving forward.

At Therapy For You, our range of treatments help you build these valuable skills, and prevent you from becoming shackled to negative, unhelpful thoughts.

For more information on Cognitive Behavioural Therapy (CBT) and overcoming depression, get in touch with our team today, or start immediately by signing up to our online course.

You must be 16 years or over

If you are under 16 years old you are unable to register for an online account with Therapy For You.

Whilst COVID 19 restrictions are easing, the NHS has been advised it will still need to operate in a manner which adheres to enhanced infection control measures.

During this time we will continue to offer sessions via video conferencing, telephony and online text type – click here to find out more. If you are unable to accept appointments via these means we do offer a very limited amount of face-to-face appointments conducted in accordance to strict social distancing guidelines. Please call our contact centre to discuss your needs.